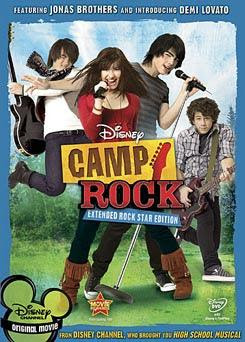 The movie stars the Jonas Brothers and introduces Demi Lovato for her first lead role in a film. The film averaged 8.9 million viewers on the night of its premiere, making it the second highest viewed movie behind High School Musical.

To play games and know a lot more about Camp Rock, click on:

I like very much this film.. because its about young people, and music..
But in my opinion in the film must to be a kiss..!

i think that this film is better than high school musical 1 and 2.
i really like it! i want to see camp rock again!

hey ana!
i'm going to try it, in english but...i don't promise anything ^^ i was seeing de film, because my cousins came to my home (i haver never put disney channel on tv) but they said me that i had it! jejej it was so exciting film!
okey, i'm going to sleep a little bit!! see you!

I saw the film and I liked very much. Its funny!!!

camp rock is the best! my friends and my enjoy a lot this film! it's a very good fiLm!

the film is very nice